New arrivals at the Farmhouse Bed and Breafkast

The Farmhouse Bed and Breakfast recently received a shipment of Buff Orpington Chicks. They arrived at 7:30 am on February 15, via the Cutchogue, United States Post office.  Our friendly post person, Mike called and said your babies arrived can you hear them?  We replied “We are on our way”.  They came packaged in a little box with air holes at the top. When we opened the lid we saw the beautiful 2 day old chicks huddle together.  We assured them everything was going to be fine and they would be warm in no time.   We were all ready with the “nursery” which is a brooder pen we had borrowed from our friend Mark, and it was perfect.  The little heat lamp was on and warming up their new home.  One by one each chick was introduced to water, their little beaks were gently dipped into the water feeder just so they could get the idea and have their first drink., And did they drink- boy were they thirsty! Then we added a little feed and they finished it in no time.

The Buff Orpington breed is a great choice for a backyard chicken – beautiful with a nice personality and winter hardiness.  The breed originated in Orpington, Kent, United Kingdom in the late 1800’s. There are Black Orpingtons, White Orpingtons, Blue Orpingtons (somewhat rare), and Buff Orpingtons – the Buff color being the most prevalent. They are raised for the purposes of both meat and egg production (a “dual purpose” breed).  They will lay Brown Eggs for our guests at The Farmhouse Bed and Breakfast

As a proud new parents of 16, we couldn’t wait to share our chick photos.  You can check The Farmhouse Bed and Breakfast blog for new updates and photos, www.thefarmhousebedandbreakfast.com 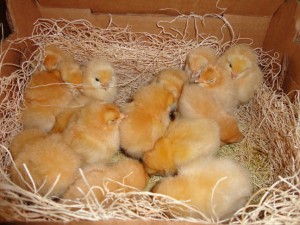